“Born ‘Neath A Star,” was the final choral selection performed by the combined choirs of San Rafael and Canyon View junior high schools during a recent Christmas concert. Other pieces selected for the combined choirs to perform were “Let Heaven and Nature Sing,” “Below the Mistletoe,” “Carol of the Bells” and “Nutcracker Jingles.” These pieces were conducted by Mr. Bird, the Canyon View instructor, who complimented the choirs on their ability to harmonize four parts a capella.

The boys’ choirs from both schools performed “You’re a Mean One Mr. Grinch” and “ God Rest Ye Merry Gentlemen,” conducted by Mr. Bird. The girls choirs sang “Hey, Mister Santa!” and “Christmas.. In About Three Minutes,” which was an arrangement of several familiar carols.

The San Rafael Junior High seventh grade choir, led by Mr. Carroll, favored the audience with three numbers: “Be Glad This Day,” “Carols Four” and “A Carol Tapestry.”  All the choirs were accompanied by Jennifer Fauver. 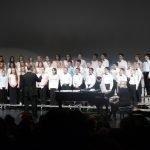 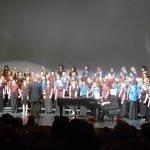 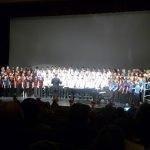 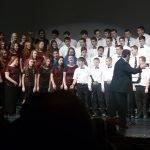 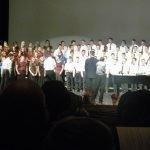