Chairman Rod Player opened the Emery County Public Lands meeting on Tuesday by announcing that there would be open positions on the council in 2022. He stated that those interested would need to apply with the county and then the commissioners will choose who serves on the board. Player also spoke about attending the Governor’s Conference on Outdoor Recreation in Logan. He felt that it was a very informational summit.

As the agency reports began, Kyle Beagley of the Bureau of Land Management (BLM) reported that on Public Lands Day, a lot of volunteer work was done on trails on Secret Mesa and Eagle Canyon. He also thanked the Emery County Trails Committee for the work the members have been doing. Beagley stated that the environmental assessment on the Millsite Campground had been completed so it should now move forward. Picnic tables and shade structures have also been installed at the Swinging Bridge Campground and Temple Mountain Junction. He reported that the communication tower site near Goblin Valley was approved and as long as requirements are met, the tower can be constructed. To conclude, Beagley reported that the Hornshadow Solar permit is currently open for public comment.

Marc Stilson, Utah State Water Engineer, excused himself from the last couple of meetings, stating that the division has been busy with dam inspections. He was happy to report that most dams were in good order. Stilson then reminded the council that the reason that Emery Water District wanted to obtain the title to Joe’s Valley dam was so that repairs could be made if necessary as well as to obtain an engineering firm for an inspection. Seismic issues are always a concern along with erosion problems and badgers on dam slopes. Stilson then spoke about the Colorado River Summit and asked for representatives from Southeastern Utah to attend.

Department of Wildlife representative Chris Wood spoke about the upcoming youth pheasant hunts, explaining that signups are online and only 15 youth will be accepted. He said that birds are being planted in Fuller’s Bottom, Huntington Game Farm and Lower San Rafael. In addition, the department will plant chukars above Milisite, Miller’s Canyon and Wilsonville. Wood also said that they have been busy doing fish surveys and found that stream rehabilitation has helped in the Huntington Canyon area; however, some areas have lost fish due to flooding.

Daren Olsen, Forest Ranger, said that the scoping process is still open and many comments have been received. The Forest Service crews have been busy with recreation work and trail improvement as well as replacing and improving signage. Most campground waters are being shut off with the colder weather. Logging continues on the forest, mainly around Electric Lake, but will move to Reeder next. The fuel project on Horn Mountain is a two to three year project covering 2,000 acres. Olsen also noted that they are hiring now for seasonal work in the spring of 2022. So, if anyone is interested, they need to apply now. Their office is only partially staffed at this time but is open for wood permits. Christmas tree permits are available online, at Main Street Market in Ferron and Castle Valley Supply in Huntington.

To conclude, Clay Croizer with Senator Mitt Romney’s office reported that Manning was appointed as the director of the BLM even with her record. Also, he said that the debt ceiling bill and infrastructure bill are still tied together and may deter the passing of either. 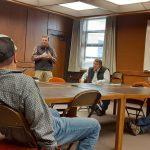 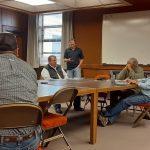 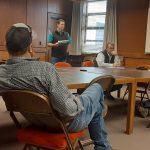