Prior to drawing the safety visa card gifts, Commissioner Lynn Sitterud announced that because of the safety record for all the employees, they have received a fantastic rating on their Workman’s Comp insurance. He expressed gratitude to all employees of Emery County. Winners of the drawing were Kimberly Howes, Lisa Mangum, Natalie Olsen, Jeanette Bray, Jax Gardner and Becky Jewkes. The Emery County employees has racked up 1,106 days of working safe and smart.

Next, representatives from Kimball and Roberts were present online to discuss the 2020 financial audit for the county. Great reviews were received from the auditors. They reported that Emery County was the only entity that they audited that had two CPAs, which includes Brenda Tuttle and Josie Stilson. They reported that there were no material errors and everything was in order financially.

They also reported that the county had a net worth of $2.7 million, which is a substantial increase. The biggest debt the county has is still for the swimming pool. Kimball and Roberts found nothing irregular or illegal in the financial statement and there were no internal control problems reported.

Next, Linda White addressed the commission about her desire for in-person voting. She was told that she could come to vote at the county administration building, but had to bring her ballot with her. White stated that was not in-person voting.

The commissioners explained to White that transitioning to mail-in was basically a budget decision as the state would no longer provide the machines and materials for in-person voting. They also reported that Carbon and Emery counties were the last two counties to change to mail-in voting.

White felt that problems in national voting needed to begin on a local level and stated that is the only level she can address. The commissioners suggested that she contact her state representatives with her concerns.

Approval was then given on adjustments for three tax parcels of veterans. These are new applications received by the county. A change order for the Emery County Jail fence upgrade project in the amount of an additional $26,000 was also approved. This money comes from CARES Act funding.

Bids were then opened for the road shop improvement. The bids came from Guymon Construction ($43,587.50) and Southeast Fencing ($36,000). These bids will be forwarded to the county attorney as well as Johansen and Tuttle Engineering for inspection before being awarded.

Next, Emery County Sheriff Greg Funk reported on an increase in thefts, especially in the Ferron area. He asked citizens to please keep outbuildings locked and eyes open for strange parked cars. He suggested that if anyone sees something to please report it. To conclude, Commissioner Gil Conover thanked the sheriff for the work of his department. 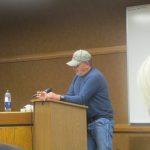 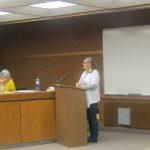