“I didn’t run the time I wanted, but I couldn’t have gone any faster,” she explained. “It was a great experience to go there. The whole 26 miles you have people yelling and cheering for you. It’s amazing.”

Funk-Guymon started her long-distance running career in high school before moving on to run at Utah State University. In September 2014, she raced her first ever marathon in Cottonwood Canyon, qualifying for the Boston Marathon.

“I had never ran a marathon until I did that one,” she commented. “After I finished with a qualifying time, my friends encouraged me to run the Boston Marathon.”

Funk-Guymon ran three times a week while cross training twice a week to prepare for the marathons. Now, she plans to take a break from the 26.2-mile challenge and step into some 13.1 mile races.

“I plan on doing some halves for now and maybe doing another marathon next year,” she explained.

In the meantime, Funk-Guymon continues to coach distance runners for the Emery High track team before gearing up for cross country in the fall. While the coach trains future potential marathoners, previous students are following Funk-Guymon in similar feats. Rebecca Bott Sweat, who was coached by Funk-Guymon at Emery High, also made an appearance at the Boston Marathon. Sweat crossed the finish line just after her former coach, notching a time of three hours and 39 minutes.

Funk-Guymon has coached runners at Emery High for twelve years. She also teaches math at the school. She has three young girls with her husband. 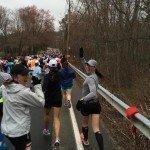 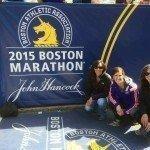 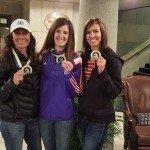 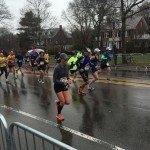 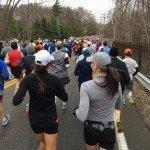