In the contest Aubreyona was the 1st place individual and Preslee was 3rd. All team members placed in the top 12 at state. There were 25 teams competing in the event. This team will compete at the National FFA Convention in Indianapolis, IN in October 2017.

Other teams competing were as follows:

There were about 62 teams competing in Logan this week. 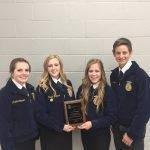