According to a Carbon County Sheriff’s Office press release, Sunday night at approximately 6:15 p.m., officials were dispatched to a vehicle accident near Benches Road in Consumers Canyon where a truck went off a nearly 200-foot cliff, killing one of two victims.

Donald David Ethan Winter, 18, a senior at Emery High School, was ejected from the truck and was found dead at the scene.

The second victim, whose name has not been released, was transported to Castleview Hospital and treated for injuries that were not life-threatening.

Winter was well-known in the community for his work on the soccer field, helping to contribute to various wins by the Spartans, scoring numerous goals last season.

The cause of the accident, according to the sheriff’s office, originated from weather conditions. Drugs or alcohol were not suspected by officials. 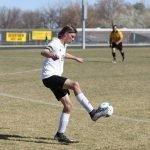 Winter during one of the Emery’s soccer games last season