Connor Cramer, a junior at Emery High School, was sworn in by Emery School District Business Administrator Jared Black as a new school board member during a meeting on Wednesday evening. Although he will not have voting privileges or be included in closed meetings, he will be involved in discussions and other board considerations.

Next, Ryan Maughn reported to the board about the school report card. Although there was no letter grade from the report, it targets proficiency growth and growth projection. It is taken from the SAGE tests, which students can opt out of if desired.

Superintendent Larry Davis then presented names for hiring approval. These included Carter Robinson as a special education aide and youth in custody agent at Emery High as well as Courtney Cox to maintenance to replace retiring Bob Price. These names were approved and notice given that they will be hiring a custodian for Huntington Elementary to replace Cox.

The request for a Land Trust Amendment at Book Cliff Elementary was approved. This will provide funds to send incentive learning packets home with the students, which will be monitored and rewarded upon completion and return to the school.

Principal Garth Johnson welcomed the board to Huntington Elementary, where the meeting took place, and reported the joys of working at the school. He told of their Character Ed. Program called “ Me Too We,” which has resulted in good things happening throughout the school. There are weekly, monthly and year-end rewards as incentives, Johnson explained. He also expressed his appreciation for Ashley Jensen in her role as a counselor in the school and stated that they are seeing kids find potential in themselves.

Supt. Davis started his report with three positive news items. The first was the announcement of the district spelling bee winners: Jexton Woodhouse, Jaxon Durrant and Bryndli Stevens. He also reported that the auto mechanic program at Emery High had received renewal and accreditation. Chandler Peacock has also worked and received his own credentials while teaching. The third item was the mention of the Coal Strike Team, which aims to boost financial prosperity in Carbon and Emery Counties.

Supt. Davis also reported about a couple of bills at the legislature he is watching carefully; HB 198, which precludes accountability in grades for the schools, as well as the Juvenile Justice Reform, which will help regulate truancy in the schools. Davis plans to be at the legislature for a number days every week until the session closes.

Finally, Jed Jensen reported of the working relationship with USU Eastern, especially Dr. Gary Straquadine, in the CTE programs and the importance of that within the district. 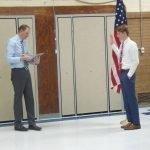 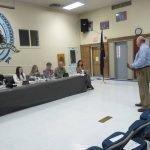