It is that time of year when newly or re-elected officials are sworn in and the Emery School Board was no exception on Wednesday evening. Jared Black, business administrator, administered the oath of office to incumbents Royd Hatt and Marie Johnson. They will serve for another four years until January 2023. Tracy Johnson was elected as the board president with Marie Johnson as vice president. Black was also unanimously appointed to remain the business administrator.

Superintendent Larry Davis then presented names for hiring approval. Jerry Vetere and Ryan Hunt were selected as coaches in Green River, Morgan Batty as a preschool assistant in Ferron, Heather Behling as principal at Ferron Elementary and Amanda Nelson as the district preschool coordinator. All the names were approved by the board.

Athletic activity schedules were also approved, including the request from the Emery High School baseball team to attend the Mesquite, NV tournament in March. An out-of-state travel request from the automotive department at Emery High was also granted. An amendment to the trust land funds for Ferron Elementary to add a 29.5-hour teaching assistant was approved and will now be sent to the state for approval. The purchase of two new buses for the district was also approved.

Next, Cottonwood Elementary Principal John Hughes addressed the board with his principal report. In his fourth year as principal at Cottonwood, he reported that their mastery grading system is working well. He stated that one change has been added to their no homework policy: If a classroom assignment is not finished, a stamp will be added and that assignment is expected to be finished at home. Hughes then explained that Cottonwood’s lunch remediation program entitled SMRT (Student Mastery Remediation Time) is assisting students with skills needing extra help. He also applauded Mrs. Carroll for her involvement in the reading program and the grants she has received for the school.

Supt. Davis started his report reading a letter from a parent praising the band program in the district. He then told of a student, Conner Cramer, who had presented him with a petition with adequate signatures requesting student participation on the school board. The board invited Supt. Davis to bring this student to the board meeting next month for discussion of this item. The board also wished to make others aware of this opportunity.

Finally, Neal Peacock, Emery High drama instructor, reported to the board about his 200th production approaching in March. He requested only their support, not monetary assistance. The play will be a musical from the 70s,” Xanadu,” and plans are to make this a large celebration. 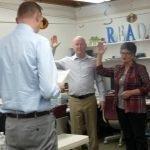 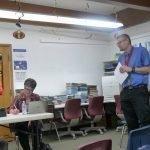 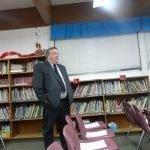