This month, the recognition came in the form of department of the month, as the entirety of the county road shop was nominated and chosen. This, according to Barnes, is more than deserved. She explained that the process of nominating the department began several months back when the employees were handling an excavation.

Daniel Luke of the road shop stated that in February, he and Commissioner Larry Jensen were in Nine Mile Canyon conducting an evaluation when they found a large slab of rock. It was from the panel by the Harmond Canyon intersection that, due to frost and ice, had come off the ledges and landed next to the roadway.

This slab was 11 feet long and six feet thick. Luke stated that they then discovered that it had markings on the surface. From there, they worked with the Bureau of Land Management and others to ensure that it could be skillfully moved, which was done successfully. The slab was relocated to a place that it could still be viewed.

Barnes stated that this example was just one of the many things that the employees of the department handle for the county, crediting them as dedicated and hard workers.

“There’s so much that goes into maintaining our roads,” shared Barnes. Barnes continued by informing the commissioners that she has always said that the road department workers have a soft place in her heart and she can’t thank them enough for all they do for the county.

Luke stated that the greatest asset they have in the department are the crew members who push each other to do better each day and strive to do quality work. He then thanked the commissioners for the recognition.

From there, Commissioner Jensen said that he would echo Luke’s remarks and added that it takes a lot of skill. He continued, stating that he has not received a single complaint in three years about the road department employees.

“Thank you, I really appreciate you,” said Commissioner Jensen.

Commissioners Casey Hopes and Tony Martines continued the praises with Commissioner Hopes saying he oversaw the department in the past and they are very professional in all that they do. Commissioner Martines then shared that, with the snow coming, the crew members will be working their tails off.

He then stated that they also help out in other areas, such as assisting at the fairgrounds during the annual Demolition Derby, which makes the set up and take down process much smoother. 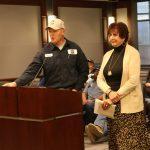 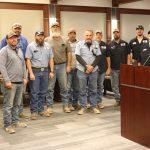