Also honored at that Cottonwood Elementary assembly was Pam Howard, who received the Emery
District Volunteer of the Year Award. Mrs. Howard serves as the school’s PTA president. Other awards presented on April 26 were: Classified Employee of the Year Award to Kerri Allred, who works in the Emery District Business Department, and the Secondary Teacher of the Year Award to Dale Roundy, a science teacher at Green River High School.

Superintendent Larry W. Davis made the presentations to each recipient. “We have so many excellent teachers and support personnel in our district that selecting just one in each of these categories is beyond difficult,” he said. “At the same time, we believe in the process and support the annual recognition program. Congratulations to those selected.” The superintendent also thanked the many district stakeholders who submitted nominations.

The awards announcement came after a lengthy nomination period and selection process. Final judging was made by a district awards team whose members submitted anonymous ballots.

This year’s Teacher of the Year, Stephanie Roper, has worked in the district for 25 years. According to Ryan Maughan, district supervisor of student services, “Stephanie is a champion for her schools and an advocate for her students, teachers and community. She works effectively in many collaborative teams and is data-driven to find the most effective instruction for students.”

Regarding the Volunteer of the Year, Pam Howard, Cottonwood Principal John Hughes said, “When it comes to volunteers, Pam takes the cake. She has served as president of the PTA for the past two years. Her passion to help and support our teachers and students goes beyond what I would ever expect as a principal. Pam, and her presidency, are at the school frequently helping with one event or another. Being PTA president is a hard job, and Pam is a total rockstar.”

The Volunteer of the Year Award is new to the district’s recognition program. “By adding this award, we are recognizing that service to our schools and our students goes beyond what our employees are doing,” Superintendent Davis said. “It also shows appreciation to the many volunteers who contribute daily to the education of our children.”

In honoring the Classified Employee of the Year, Kerri Allred, Business Manager Jared Black noted that she has worked for the Emery School District for nearly 24 years, including nine years as an educational assistant and 15 years as the accounts payable specialist. “Kerri excels in all of her assignments and works with a high level of efficiency,” Mr. Black said. “She has outstanding customer service skills and is always friendly and cordial in working with a variety of vendors, employees and the public.”

Dale Roundy, the Secondary Teacher of the Year, has been at Green River High School for 13 years, and according to Principal Kayce Fluckey, has worked hard each of those years to improve his content knowledge and teaching skills. “Dale is a great science teacher,” the principal said. “He makes learning fun and engaging.” She points out that Mr. Roundy teaches secenth and eighth grade science as well as earth systems, biology, physics and environmental science. This year, he added robotics to his schedule and spends most afternoons after school working with the robotics team.

In addition to the announcements at each of the winners’ respective schools, they will be honored by the Emery School Board at its June 20, 7 p.m. meeting at the district office. 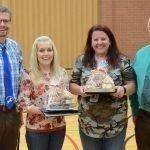 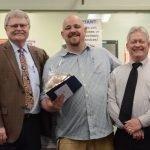 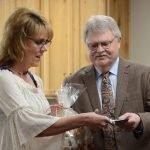