The Emery County Historical Society met and listened last week to Mike Ralphs, who explained what makes the local area vastly different from other deserts of the Southwest.

Ralphs is a retired research scientist from the agriculture research service branch of the USDA at the poisonous plants lab in Logan. His areas of research have included the grazing behavior of cattle in respect to poisonous plants, targeted grazing to control poisonous and noxious weeds, herbicide and biological control of poisonous plants and the environmental influences on toxin concentrations in plants.

Ralphs explained the geology of the San Rafael Swell, stating that there are 37 different layers creating the Swell and 7,000 feet of sediment creating the canyons and plateaus. Ralphs enlightened the group of the conditions that limit plant growth, including saline, sodic (alkali), rocks, gravel and shallow soil depth.

Ralphs also spoke about the soil texture, vegetation type and precipation zones. He discussed the various plants and trees that grow in the different areas of the desert and mountains.

Ralphs concluded his remarks, after which society members viewed many plant specimens that Ralphs brought to display. 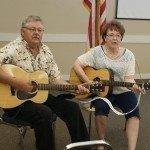 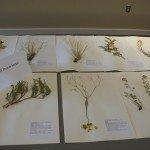 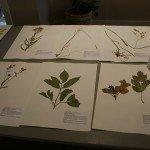