The San Rafael Back Country Horsemen (SRBCH) are proud of their contribution to the concept and construction of the first equestrian campground ever built on Bureau of Land Management land in Utah. The campground is adjacent to the San Rafael River in Buckhorn Draw with views of towering cliffs to the north and the iconic landmarks Window Blind and Assemble Hall Peaks to the south. Development of the equestrian campground begun in 2009 and was completed in April 2014.

Camping has always been a land use in this vicinity, but the original campground (on the south side of the river) and the 2002 expansion (on the north side of the river) excluded horse and pack animals. The BLM realized the area was frequently used by equestrians and had intended to provide a corral in the future.

In 2009, the SRBCH contacted the Price BLM office with an offer to help apply for funds and build the proposed corrals. Funds came from several sources including the State Recreational Trails grant, the Back Country Horsemen of America Education Fund grant, Emery County, BLM and SRBCH. The SRBCH members agreed to provide welding equipment and expertise as well as manpower to construct the corrals. Work began in 2012.

Emery County contributed several days of heavy equipment work as well as many yards of road base to construct the improved access road and parking areas for the new campground expansion. SRBCH assisted with the construction of the campsites by moving soil, building several hundred feet of post and rail barriers, constructing pipe tie-rails and cementing in metal poles for corrals at each campsite.

In December 2012, SRBCH set the posts in concrete, just before a snow storm blanketed the area. The BLM graveled the five campsites and outfitted the sites with picnic tables and fire rings.

SRBCH members and BLM staff returned twice in 2013 (spring and fall) and a final time in April 2014 to finish construction and welding of the five horse camp sites, the group corral and the vault toilets.

A designated place to camp encourages visitors to stay a while and explore. The desert solitude and magnificent landscape is awe inspiring. A number of nearby trails follow the river or carry the rider off into the canyons of the Sids Mountain and Mexican Mountain Wilderness Study Areas where Butch Cassidy and the Wild Bunch took refuge from the law.

Due to extreme temperatures, the best  seasons to visit this desert area are spring and fall. It’s a rustic camp  without running water. Visitors must bring their own camp water. There is water nearby in the river for the horses. 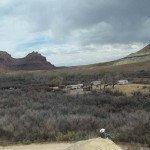 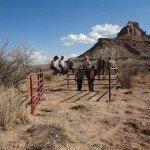 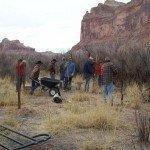 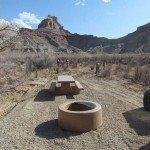 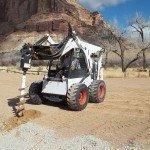 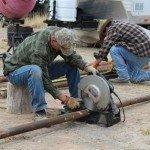 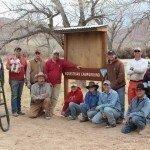 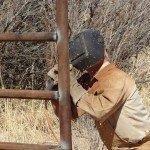