Many awards and recognition were given during the Carbon County Commission meeting that was hosted in the commission chamber on Wednesday evening. One such recognition was Robby Jensen receiving a community service award.

Jensen works for the senior citizen centers in both Carbon and Emery counties. Recently, he approached commissioner Casey Hopes when he discovered that there was a homeless senior that visited the center. Jensen took the senior, put him in a hotel overnight due to not being able to immediately get an evaluation with the Association of Governments, and sat with him in his hotel room while they ate pizza.

The following day, Jensen assisted the senior in receiving the services that he needed in order to get off of the streets. Commissioner Hopes stated that Jensen does a great job at the center and the seniors thoroughly enjoy him.

“I wanted to recognize him for that,” Commissioner Hopes stated.

Chidester was nominated by her boss, Marsha. Henrie stated that she knows that Chidester’s face is one that is often seen at the shop, and that the customers love her and she is a lot of help. She wanted to thank Chidester for her wonderful devotion. Henrie then handed Chidester a certificate and a $50 gift card.

“I love Carbon County, been here all my life,” Chidester remarked. 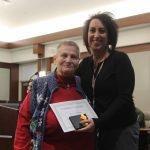 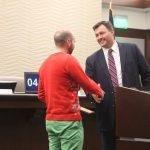 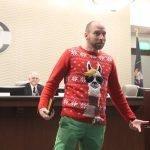 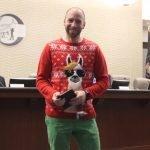