Eagle Scout Luke Brady was invited to visit the Carbon County Commissioners during their meeting on Wednesday evening to discuss his Eagle Scout project.

Fourteen-year-old Brady chose to plant trees at the fairground soccer fields with the intention of providing shade for those that watch the games as well as beautify the fields. Brady’s uncle assisted by connecting him with Ivory Homes, the company that was willing to donate the trees. Ivory Homes did a lot of work in assisting Brady with his project.

From there, he approached Commission Chair Tony Martines, who approved the project. Brady worked with many individuals that helped the project go as smoothly as possible. On May 25, the tree planting commenced.

There were a total of 31 trees were planted and over 70 individuals attended to help. “It looks fantastic out there,” Commissioner Martines remarked.

Commissioner Larry Jensen asked Brady what he learned from the project, to which he replied that he learned how to organize events and a great deal about communication as well as gathering volunteers. Commissioner Casey Hopes thanked Brady for the planting, stating that in the future as the trees grow, it will be amazing.

Brady then thanked Commissioner Martines, treeutah.org, the volunteers and more. Martines praised Brady for being very dedicated to following through with the project. 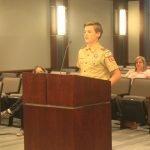 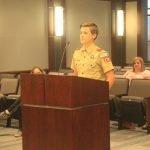 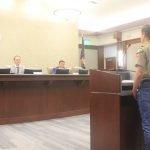