According to reports, the incident occurred when a driver was traversing Highway 6 though the canyon and a falling rock struck the vehicle.

It was reported that the rock was as big as a kitchen table, and part of it broke off and became lodged in the passenger seat. There were no passengers in the vehicle and no major injuries were reported as a result of the incident. 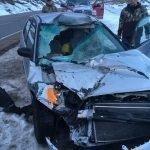 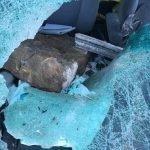