A fatal accident occurred Tuesday at approximately 8:02 a.m. at milepost 204 on Highway 6.

According to Utah Highway Patrol, an Infinity carrying two adults and two children attempted to pass a semi while traveling eastbound. Snow and slush were on the roadway and blocked the driver’s vision. The vehicle crossed the center line and collided head-on with a Honda Civic that was traveling westbound.

The driver of the Honda sustained fatal injuries. A medical helicopter was called to the scene but could not land due to weather conditions. All five occupants were transported for medical attention. Clinton Lee Logan, 34, of Springville was the fatal victim in the accident. 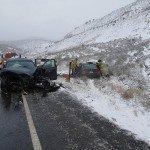 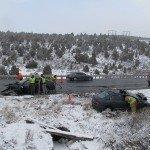