Toni and Bill Thayne were on hand to help teams of students compete with their best main dish or dessert dutch oven recipe. Students had four hours to prepare their entries before submitting them to a panel of judges who selected the winners by taste testing the works of art.

In the main dish category, the team of Dylan McKinnon and Logan Flores took first place for their southern baked  beans. The team of Annamaria Cartwright, Gunner Jeffs, Jade Shepherd and Abby Maddox took second with their salsa chicken. The team of Carter Fausett and Derik Riley took third for their famous lasagna.

In the dessert division, the team of Rayden Andrews, Karlie Bright and Adam Morley took first with their Reese’s peanut butter pie. The team of Tyler Yoklovich and Micheal Campbell took second for their Dutch oven cinnamon roll apple pie. The team of Bryce Hocansen, Kelly Newby and Alex Rodriquez took third for their monkey bread.

The winners were all awarded a gift card to Walmart for their efforts. 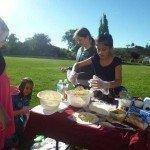 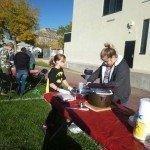 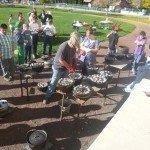 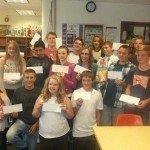