With the recent resignation of council member Shala Hunsaker, Ferron City needed to appoint someone to the open seat for the remainder of 2021. Following the notice, letters of intent were received from four candidates.

Three of the candidates, Wayne Urie, Becky Nelson and Brad Richman, were present at Thursday’s city council meeting and were given some time to introduce themselves to the council. The council then voted with silent ballots. Brad Richman won the popular vote, taking the oath of office as he was sworn in by Ferron City Recorder Brittany Yeates.

Next up, Desertview Federal Credit Union was recognized as the business of the month. Desertview was established in 1960 with the philosophy of “people helping people.” The Ferron Branch of Desertview was added in 2003 to extend the availability to their membership.

Mayor Adele Justice remembers when Desertview expanded to Ferron and how ecstatic the city was to have them there. She said they especially appreciate the service of the wonderful tellers and their desire to be part of the community.

Then, the discussion of security systems, which started in the last meeting in January, was continued. Verkada seemed to have more than the city felt they needed, Bryan Christensen recommended to stay with what they had and decided not to bid. Wayne Roberts submitted a bid of $1304.18 to put two cameras in the fire station. The bid was accepted by council.

Becky Nelson then requested that locks be added to the cupboards that store medication. The recorder showed a new bid from Superior Security Systems for the doors at the city hall and she is requesting bids for the restrooms as well. The city will then apply to the county for the return of some CARES Act funds to cover the expenses.

A motion was made to accept six members to the fire department who have cleared their background checks. They include Dusty Justice, Jennifer Price, Willard Hawks, Eddie Deto, Andy Nelson and Wayne Urie. The motion was approved. Ferron City Fire Chief Dell Mead said they still need to arrange for drug screens.

Sherrie Swasey told the council that the Southeastern Utah Jr. Livestock Show is going to be hosted this year. She requested a $175 donation to sponsor the “Best of Emery County “ buckle. The request was granted. Council member Troy Winter later announced that the county-only stock show will be June 24-25 and then the annual show will be July 6-10.

Council member Winter also asked if there needed to be a height limit on headstones at the cemetery. The council did not think this was something they needed to pursue at this time. Winter also commended council member Chris Winn for the work he did on the sidewalks to San Rafael Middle School.

New council member Richman is also on the planning commission and he reported about the trails plans they had presented to them last week. Mayor Justice stated the preferred routes are from the fairgrounds on Canyon Road up to Millsite and one following State Street to Clawson.

The mayor also announced that Dollar Tree has interest in coming to Ferron. She cautioned council member Winter to be careful with spring cleanup at the cemetery, giving the example of what happened in Price with the recent cleanup confusion.

The recorder reported that she spoke to Rocky Mountain Power about changing to LED lights and received a quote of $30,000. The option of replacing the lights as they burn out was chosen by the council.

In citizen comments, Wayne Urie said that he had spent many hours working on a Community Development Block Grant grant to purchase a new truck with the funds but was told just a couple of days before the deadline he could not submit it. He wanted the city to come up with a plan to see that this doesn’t happen again. 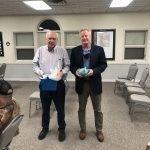