Kyle and Carrie Fox brought one of the the largest American flags in the world, weighing in at 400 pounds, to show to the students of Ferron Elementary at their first Liberty Kids Assembly on Friday afternoon.

Before sharing the flag, Kyle told his story of obtaining it. Mr. Fox said he woke up one morning with a desire to hang a large flag across a canyon. In 2015, with the help of friends, they used a drone to stretch the fish wire across the canyon and then pullied a larger cable with the smaller wire. The flag was then hoisted to fly across the canyon. The flag was 30 feet wide and 60 feet long. This was a surprise to many in the area and meant a lot to those who’s loved ones lost their lives in military service.

Then, Kyle Fox got a bigger flag, the largest one in the world. He later became acquainted with “The Candy Man,” Gail Halverson, a World War II hero. Halverson sewed the first star on the large flag.

Kyle Fox was also instrumental in purchasing and restoring a deceased veteran’s car for his young son, Justin.  Justin’s father lost his life in 2003 when Justin was six months old. His mother had to sell the car, but when Justin turned 15, he really wanted his father’s Toyota convertible. Kyle Fox found the car and, through donations and volunteers, purchased it, restored it and drove it to Texas to present to young Justin.

Following his presentation, he invited the students to the lawn and the students were able to handle the flag and display it on the lawn.

The older students stretched the flag while the younger students were under the flag. All stood at attention to sing the National Anthem. 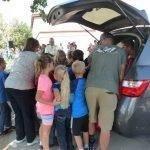 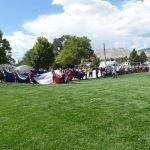 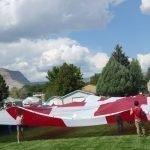 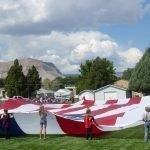 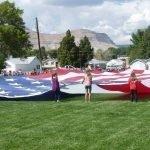 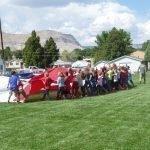 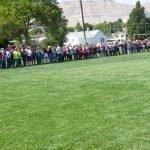 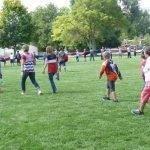 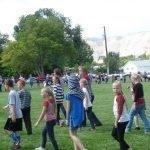 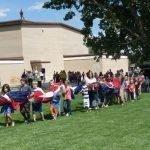 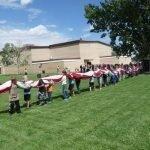 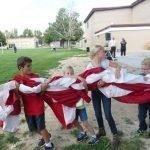 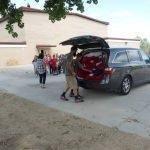 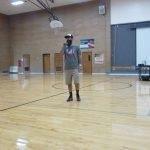 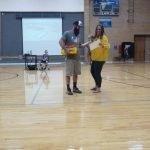 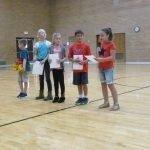