For the past few years, Ferron City has hosted a Field of Flags celebration on Saturday morning during its annual Peach Days celebration. This year was no exception, but the day also happened to fall on the 20th anniversary of 9/11. Thus, the Field of Flags became a special tribute to the heroes of that day.

Over 400 flags were placed strategically on the park lawn to remember the lives lost that day. Ferron City Mayor Adele Justice welcomed everyone to the ceremony, reminding them that it was the 20th anniversary of 9/11 as well as 125 years of statehood for Utah. Following the opening prayer, the American Legion Post #42 gave a 21 gun salute and Mandi Wilberg played “Taps.” Shala Hunsaker then sang the National Anthem.

Gina Swasey, Auxiliary Commander, then introduced the state auxiliary essay winner, Natalie Pace, who read her essay entitled “Addressing the Health of Our Veterans.” The Huntington Glee Club then sang “Stout Hearted Men,” followed by Ferron Elementary’s rendition of the “Grand Old Flag.” Janice Snow from the auxiliary then read the poem “Lest We Forget”.

A solo performance of “Have You Forgotten” was sung by Sarah Swasey. The Huntington Glee Club then closed the program with an Armed Forces Medley.

Mayor Justice spoke in closing about honoring the resiliency of America and answering the true test of American patriots. She extended her appreciation for everyone that had made the morning so special.

The closing prayer was offered by Clifford Snow, who reminded everyone that the 13 flags set aside from the rest were in remembrance of those who recently lost their lives in Afghanistan. The Missing in Action Flag was also included on the field. 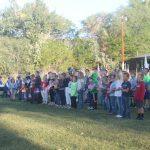 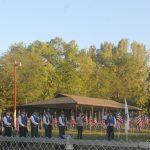 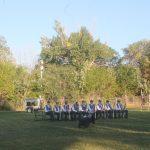 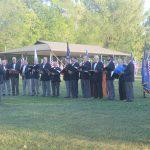 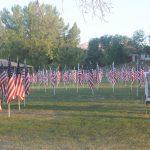 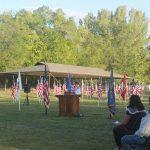 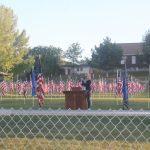 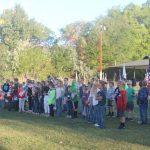 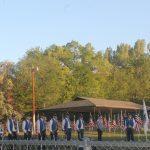 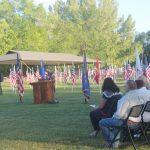 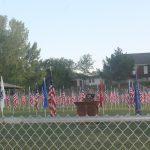