On Wednesday, students Nya Parkins and Meliah Jensen performed an anti-bullying assembly for fellow classmates and parents with the help of custodian Melanie Miera and counselor Ryan Hepworth.

It all started with a fellow classmate and friend of Parkins’ and Jensen’s telling them that he had been threatened and bullied. The girls were upset by what their friend had told them and they went to custodian, Miera, to explain what they had heard. Miera didn’t talk to the bullies, she merely went to stand next to them as a sign to let them know that she knew what they were up to.

Parkins and Jensen decided that it was time to do something to try and stop bully’s at their school, so they went home and together they came up with an outline for an assembly. They took their idea to Miera and then the three of them went to Principal Jerel Lofley and counselor Hepworth with their outline. From there they put together an anti-bullying assembly titled “The Voice.”

The outline for the assembly was put together as cell phone applications. However, instead of the typical applications found on a cell phone, they came up with 16 anti-bullying applications such as, protect me, stand by me, caring attitude, peace maker and encourage me.

Hepworth, who is a counselor at Canyon View Jr. High, Green River High School and now Cleveland Elementary, explained to the students what bullying is and the different aspects of being the bully, the victim and the bystander.

He demonstrated how intimidating a larger student can appear to a smaller student and how having one more person standing next to the smaller one can make that one appear larger.

Hepworth explained to them that since bullying is mostly a learned behavior it can be unlearned. He talked about the victims of bullying and how bystanders can help put a stop to it all by standing up for the victim and not standing behind the bully and to let their voices be heard. 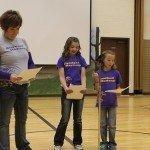 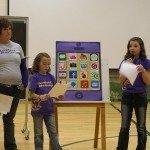 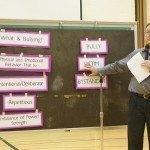 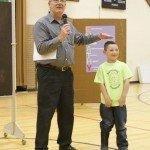 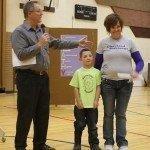 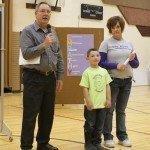 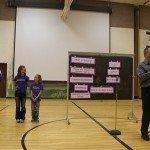