A fire blazed in Scofield on Monday afternoon, rendering a recreational property cabin belonging to Curtis Steele a complete loss.

According to Carbon County Sheriff’s Office detective Wally Hendricks, the Helper Fire Department responded to the fire as well as Deputy Shawn Addley.

The State Fire Marshal will be investigating the fire. However, Steele believes that the fire was caused by a wood-burning stove. 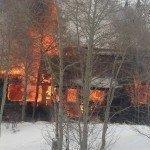