Eight teams competed on Jan. 4 at the FIRST Lego League region event in Price. The competition is part of a worldwide program open to 9-14 year-old children interested in science and technology.

Three teams from Helper Junior High, two from Mont Harmon, one team from both Moab and Duchesne, along with one independent group from Carbon County participated in the local event.

Each team was faced with the task of designing a robot that could interact with various obstacles. Robots were pre-programmed and were not operated by remote control. Rather, the robots were programmed by the competitors prior to the competition.

During the event, each robot had to complete as many missions as possible in a two and a half minute time frame. Robots were also judged on design, mechanics, programming and structure.

Teams were challenged to come up with an innovative solution related to this year’s theme, Nature’s Fury, which focused on natural disasters. Independent team Rockin’ Robots created a multipurpose blanket to be used in a 72 hour emergency kit. The blanket is designed to protect users from various elements during a disaster.

The invention along with the team’s overall effort secured the robot performance and champion’s award trophies for the Rockin’ Robots. Because they walked away with top honors at the local event, the team will move on to compete at the state level on Jan. 25. There, over 55 teams will vie for the state championship.

FIRST, which means For Inspiration and Recognition Of Science and Technology, is a non-profit organization. Their goal is motivate young people to pursue education and career opportunities in science, technology, engineering and math while building self-confidence, knowledge and life skills. 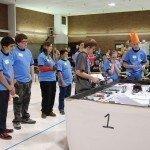 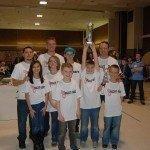 Rockin’ Robots took home the top honor and will move on to the state competition. Photo courtesy of Allison Williams. 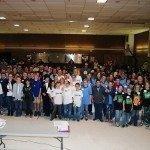 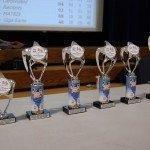 Trophies for the winners. Photo courtesy of Allison Williams. 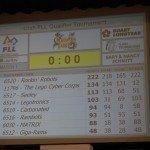 The final scores for the region event. Photo courtesy of Allison Williams.