For the first time in Carbon County, a co-ed horseshoe league was organized. Eleven teams participated in the league, which lasted five weeks and consisted of couples, family members and friends with each team consisting of one male and one female.

According to league founder and organizer Rochelle Badback, the male players pitched against one another while the women threw head-to-head.

“Over the last two years, I noticed that on league nights, after matches were played, a lot of the females would stick around and try to throw horseshoes,” Badback explained. “I thought a co-ed league would be a great chance for couples to get out one night a week to spend time with each other doing a fun activity.”

Prizes were also offered to co-ed league participants. According to Badback, Nicki Spaghetti donated several gift certificates that were awarded at the end of the league tournament.

“This was one of the most exciting and fun leagues I have ever organized,” Badback stated. “This has sparked a lot more interest for female players to participate in regular summer and fall leagues as well as the local tournaments. I want to organize an all female league, but need a few more female players interested in participating.”

Badback is also the founder of the Carbon County Horseshoe League, which is organized under the direction of Carbon County Recreation. The league participates in numerous tournaments each year and conducts fundraising events.

On Sept. 27, the Throwing for Cancer Leukemia and Lymphoma Society tournament will take place followed by the Coal Miners Memorial tournament on Oct. 4. Both events will be conducted at the new Price City horseshoe pits near Washington Park. Proceeds from both tournaments will go to each of the local organizations mentioned in the tournament title.

“We would like to see the community come out and support both of these events,” Badback concluded. 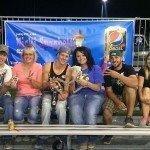