On Wednesday, at about 7 p.m., a team of local law enforcement officers intercepted and arrested Jason Jared Jaimez, 38, formerly of Helper and currently residing in the Salt Lake County area. Jaimez was allegedly enroute to Carbon County to deliver drugs.

Carbon Metro Drug Task Force Agents Mike Adams and Stephen Regruto were aware that Jaimez was a fugitive from Adult Probation and Parole and that there were six no-bail warrants out for his arrest, relative to violating the terms of his probation. The agents have recently been investigating Jaimez’ alleged drug dealing activities. Jaimez was intercepted on Emma Park Road while allegedly enroute to Carbon County. Jaimez possessed approximately four grams of methamphetamine, two grams of heroin and about $800 cash when arrested.

Task force agents were assisted by Utah Highway Patrol Troopers, Helper PD, Carbon County Sheriff’s Office and Price PD. Helper Police Chief Trent Anderson transported Jaimez to jail and booked him in on the six no-bail statewide warrants. Jaimez was also booked on the new charges of possession with intent to distribute methamphetamine and heroin (a first degree felony), possession of paraphernalia and driving on a suspended driver license.

On December 22, 2014, Jaimez was placed on probation by the Seventh District Court after his convictions for third-degree felony manslaughter and second-degree felony distribution of a controlled substance. He was sentenced to up to five years in prison and one to fifteen years in prison respectively, with both prison terms being suspended. The court ordered that both sentences be served concurrently (at the same time) with one another, as well as concurrently with five other cases before the court. 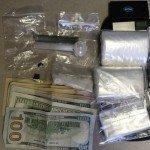