Pictured: Joven Morrison (L) and Jaylee Cox (R) pose with their plaque confirming the team as national qualifiers after a recent debate tournament on Saturday. The duo have qualified for two national tournaments, one in Kentucky and the second in Alabama later in the summer.

The Carbon High debate team traveled to Skyridge High School on Saturday to compete at the National Speech and Debate Association National Qualifiers and walked away with several students qualifying for the national tournament, which will be hosted later in the year.

Alheli Pendleton and Zoey Kourianos as well as Jaylee Cox and Joven Morrison all qualified for the NSDA National Tournament and will travel to Birmingham, Ala. in June to compete.

Cox and Morrison have also previously qualified and will also represent the Dinos at the NCFL National Tournament. which will take place May 27-28 in Louisville, Ky. 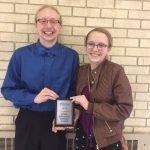 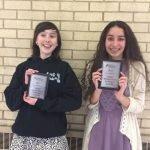