September marked national Hunger Action Month, a time when the nationwide network of Feeding America food banks unite to urge individuals to take action in their communities. Sept. 27 was the statewide Hunger Action Month Food Drive, when the public was able to donate at Walmart stores statewide and at their local pantries.

Southeastern Utah Association of Local Governments (SEUALG) partnered with the Utah Food Bank and Feeding America for National Hunger Action Month by gathering donations on Saturday at Walmart in Price. Food gathered at the event was donated to the Carbon County Food Bank.

“It turned out really well,” Gamber said, “It’s just amazing what the community will do for us.” She explained that the Helper ward and the fourth and fifth wards from Price were monumental for their assistance during the food drive.

Coming up, the Carbon County Food Bank will look forward to partnering with local schools to gather donations. The holiday food drive that the students take part in is the biggest collection the food bank does each year. 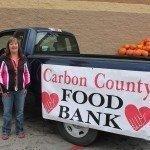 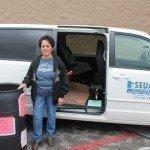