“The history is long and rich.”

After 72 years in business, no one could say anything less about Kraync Motor Company. Karl Kraync, the dealership’s owner, has had his hand in the business since he was 11. Now, he is celebrating 72 years as his birthdays continue to stack up as he serves the community.

This work ethic has been passed through generations, beginning with Frank Kraync Sr., the First Little Guy. Before World War II, Frank worked for Red Motor Company, focusing on Chevy sales until the flow of new cars dried up due to the war. That led Frank on his own endeavor as he began operating Kraync Motor Company out of his home to provide for his family. In 1945, Frank teamed up with his brother Vennie Slocko to obtain a franchise from Nash Motor Company. The pair opened their first location on Price’s Carbon Avenue.

The duo spent more than 10 years in that building, adding Buick to their offerings along the way, before needing to expand. The expansion found its home at Kraync Motor Company’s current location on 300 East in Price.

In the 1960s, Kaiser Jeep was added to the company’s lineup. Shortly after, both Frank Sr. and Slocko both passed away, leaving the company in the hands of Frank Jr. and Karl.

This left Karl in the company’s driver seat. While already working full time at Vocational Rehabilitation, Karl also took on the running of the company, putting in time at both locations, sometimes at 18 hours a day.

Now, Karl has slowed some, but not much. He is still working nearly 12 hours per day, at least five days per week, while he operates Kraync Motors and continues offering professional counseling services at the dealership.

Since his takeover in the 90s, the Last Little Guy changed gears in the company, turning back to its roots: selling previously owned vehicles. Vehicles are picked through Karl’s extensive selection process and prepared before hitting the lot.

“We still operate on the same ideals my dad did,” Karl said. “We have customers that have been with us for decades. Our customers are our friends and family.”

These customers span throughout Castle Country as well as from throughout neighboring states as customers move away but continue to shop from Kraync Motors.

“We never try to sell someone just one car, we want to sell them 20,” Karl said. “For that, we really try to take care of people and care about their welfare, not just their business.”

A former Moab couple, Harry and Sue Austin, hold the record for the most vehicles purchased from the company, sitting at over 60 cars over nearly 30 years.

These relationships have survived for decades, seeing Kraync Motors through the fluctuating local economy.

“There is hope for the community. From my earliest memories Castle Country has had its ups and downs,” Karl said. “The coal market crashed in the mid 50s and Kraync Motor Company stayed alive. The economy revamps and its been up and down at least eight times in my memory. The next rebound might not be coal but there will be a rebound and there will be a future.” 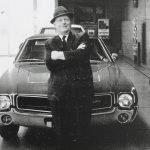