The Battin’ for Boobies Softball Tournament that took place on the second weekend in October occurred for a very special reason: to raise funds for breast cancer awareness.

The tournament began when money was needed to raise funds for an individual that needed cancer treatments. This turned out to be so successful that the decision was made to make the tournament an annual occurrence.

This year’s goal was $5,000. In conjunction with the tournament, the Running with Scissors 5K also took place over the summer and raised $405. The softball tournament came out with a total of $4,644. Combining the sums brought the total over the goal.

The USU Eastern baseball team, the Sun Center, United Way of Eastern Utah and Castleview Hospital are just a few that donated time and resources for the tournament’s success. At the Carbon County Commission meeting on November 3, the check was presented to the LIVE.LOVE.LOCAL Cancer Assistance Program. 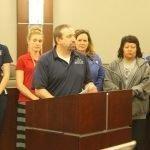 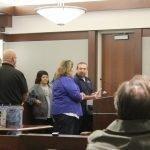