Gary Harwood, a native of the Helper area, will be entering retirement from the many hats that he wears for the city soon. Harwood grew up in Spring Glen and was married in 1980. That same year, he began working for Helper City and then came to the city fire department in 1982.

Harwood stated that the early 80s is when the department began responding to medical calls. The department then began having all of the firefighters become EMTs over a period of four of five years. By 1987, Harwood was certified himself and believes everyone on the department was by then.

The department picked up a small brush truck for medical calls and began responding to heart attacks, wrecks and a variety of injuries. The focus was mainly Helper area residents and those up the canyon. Harwood said that this was due to the fire department being able to respond long before an ambulance could and start the needed care.

Harwood became a certified firefighter I and II in 1997, also receiving his Wildland Firefighter Certification around 2000. Harwood stated that becoming Wildland Firefighter certified allowed him to go on three tours to California to fight the wildland fires there. He also has his HazMat operations and HazMat tech certification and has been on the Carbon County HazMat team for 20 years, just recently retiring from that position.

The end of May will mark Harwood’s final day at the Helper City Fire Department. For quite a while, Harwood was the training officer for the department and his recent title was assistant chief. For about 10 years, he was a certification tester for the Utah Fire and Rescue Academy, a position that enabled him to travel to different departments throughout the state of Utah and certify people as firemen. Harwood stated that was probably the best part of his working history as he was able to meet many people.

Throughout the county, Harwood has assisted in delivering three babies and said that it was a really neat thing to do as an EMT. Often, when entering a home as a fireman, Harwood stated that it is because something bad has happened in the home or to the family, making it nice to have positive outcomes.

In terms of challenges, Harwood said that the biggest would likely have to be working with the public, as it is very demanding. He said that it can be difficult trying to solve problems and remain fair to all.

In terms of his two other positions, Helper City Public Works Director and Councilman, Harwood stated that he will remain with the city until June 30 and then will retire from that position as well. For the council, he will finish his current term. Though he is leaving his professional life in Helper, he will remain in the city to live.

Mike Mastin has been announced as the new Helper City Public Works Director and has began working under Harwood’s tutelage. “It’s been a wonderful 40 years,” concluded Harwood. 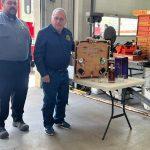 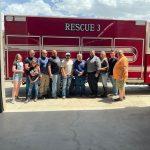 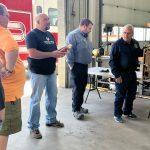