On Friday morning, the lower grades competed for a school champion in grades up to third. The winners of the lower grades were Brodie Bernard, first; Irelynd White, second; and Katie Johansen, third. They are all third grade students.

In the afternoon, the upper grades competition, which included students from fourth and fifth grades, involved more difficult questions for several preliminary rounds before the field was narrowed to five contestants.

These five were William Sharp, Hailey Brown, Luke Jensen, Abbie Moulton and Porter Stilson. Final rounds narrowed the field to the final three, including Moulton, Jensen and Stilson. A tie-breaker question about the rain that falls in Glacier National Park in Montana and the oceans it flows to gave the winning spot to Jensen with Stilson in second and Moulton in third.

Jensen will now take a test in principal Melinda Durrant’s office before Feb. 7 to determine his eligibility for the state competition in March at Thanksgiving Point. 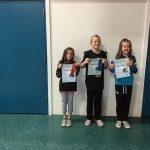 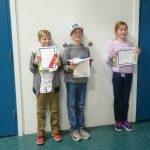