DOGM employees showed the council members where they had closed mines to the south of Interstate 70 and then to the north where there are other mines they feel need to be reclaimed. They explained that they worked hard to preserve the historical value of the surrounding areas, but because of public safety issues, the mines need to be closed. The reclamation crew has also worked hard to preserve the habitat for bats. All members felt that this was a very informative trip and that the procedures were much needed and well done.

The council then discussed an upcoming field trip, which is scheduled in place of August’s meeting. The exact route is still under advisement, but several projects in the mountain area were being considered. This trip will take place on Aug. 3 and everyone is invited to attend.

Kyle Beagley, Assistant Field Manager with the Bureau of Lang Management Price Field Office, then spoke to the council about the many sections of School and Institutional Trust Lands Administration as well as federal ground exchanges prescribed by the Dingell Act. He stated that there 208 parcels of land to be considered. Each piece of land must be visited twice before the exchange can happen, so they are very busy trying to accomplish this before the deadline on Sept. 15, 2021. He reported that they expect to accomplish this as 60-70 parcels have already been done. Beagley also reported that there is a RAC meeting on Aug. 11 at the Carbon County Fairgrounds and there remains positions on the board that still need to be filled.

Matt Wade, acting District Ranger for the Forest Service, then addressed the council. He reminded the audience that since June 25, the Forest has been in Stage 2 Fire Restriction, as is most of the state. He also outlined the removal of the gas pipeline along the Miller’s Flat Road and through Cottonwood Canyon. This began on June 27 and will continue through early July.

Daren Olsen, Forest Service, said he would return to the Ferron office next week. He also reported that the logging by Skyline is nearly finished and they expect to move to Black and Reeder Canyons soon. This logging permitting is to reduce the fire fuel in these areas. All travel with the logging trucks is planned to move out of the canyons from the top and not down through Joe’s Valley. Olsen also requested partnership with the lands council in the Forest Plan that is now in the scoping process and should be completed in early fall.

Utah State Parks reported the water levels at the parks are dropping and boat docks are hard to use. Scofield Reservoir does have an algae bloom. Visitor numbers at Goblin Valley have slowed down, but the Green River State Park and golf course remain busy.

Ryan Jones, State Department of Agriculture, announced the Agricultural Voluntary Incentive Program. The goal of this program is to implement practices that can increase crop yields, improve soil and add value to operations, while improving water quality. The Price River Watershed Conservation District, along with the Utah Department of Agriculture and Utah Division of Water, is planning a presentation on this program on Wednesday, July 14 at 6 p.m. at the Carbon County Event Center in Price. He also reported on a hay resource bank being established to help those needing hay to locate it. 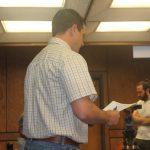 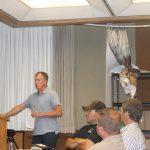 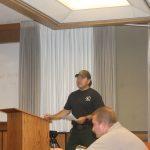