With the anticipated construction of Carbon High School (CHS) beginning, the well-known walls that spelled “CARBON” were recently torn down. However, before this took place, Anthony Cilli, CTE teacher at CHS, took the time to honor the graduating seniors on a portion of the walls.

Cilli grew up an hour north of Detroit, Michigan and when he was a young man, his father taught him how to draw bubble letters. He began painting them on snowboards and skateboard in his teen years. In his 20s, he was attending an art school in Detroit and became completely immersed in street art and graffiti culture. He has been teaching art and design for over a decade and has taught his students about street art.

The previous summer, Cilli did a small graffiti mural at the end of C-Hall in the school, around the corner from his classroom. Everyone revered the artwork, which reads “Carbon High – Home of the Dinos.” When the support staff began recently touching up paint around the campus, they had the idea to have Cilli paint another graffiti mural for the seniors.

“All of our students have gone through so much over the last couple of months and our seniors got it the worst,” Cilli said following the completed of the mural. “They’re missing out on so many traditions because of social distancing right now, I knew I had to do something special for them, so I started sketching and after coming up with a design I thought our seniors would like. We bought a few cans of spray paint and I got to work.”

The class of 2020 was well-represented on the wall. Aside from the text, there were two other bits of iconography that honored the graduates. Cilli stated that the hearts are symbolic of love for CHS and love for the seniors. The crown on the 2020 was a symbol in street art that indicates that the graduates are the best, or the “kings,” which is a sign of respect.

“This mural is just another way we are trying to congratulate this year’s graduating class during this impossible situation,” he said when the mural was complete. “Shout out to our 2020 seniors; congrats nerds! You deserve all of the things! We love you and wish you the best of success and happiness,” .” 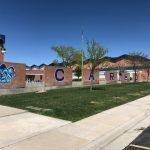 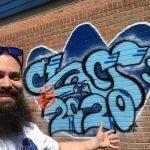 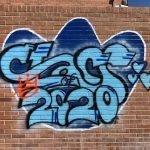 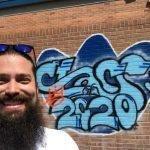 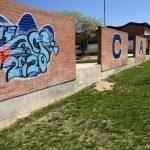