Huntington City has chosen retired volunteer firefighters from its fire department to serve as 2019 Heritage Days Grand Marshals. The following firemen will be honored by riding in the parade on the restored engine from past days in Huntington: Tom Shannon, Jerry Oviatt, Merland Jensen, Bernell Halliday, Warren Oviatt, Brent Pierce, David Bird, Allen Jorgensen and Lon Arnold. Many of these men had served in the department for 30-40 years. This was one way for the city to show their appreciation and gratitude for so many years of service.

Some of the firefighters shared an important memory from their years of service. Jensen, who served from 1980 to 2010, remembers a fun day at Canyon View Junior High where firefighters gave students rides down the hill on plastic with the fire hoses. Shannon, who gave 27 years of service, remembered helping with a fire at Thompson’s Lumber in Castle Dale, working with firemen from throughout the county. Pierce, 43 years of service, shared a scary recollection of fighting a haystack fire in Lawrence that jumped the road, saying that the firefighters had to outrun the flames. Warren Oviatt, who gave 42 years of service, spoke about a firefighter’s nightmare fighting a structure fire and finding a life-size doll facedown, fearing it was a small child. The fire department began in 1975 and has served the citizens of Huntington for all that time.

The present firemen in Huntington are also in the process of establishing an honor roll plaque in the firehouse. Other names on the list include Vernon Leamaster, Walt Mortensen, Dale Christiansen, Garth Childs, Jim Gordon, Pete Alger, Jim Pierce, Allen Jorgensen, Vernon Jensen, Thomas Jensen, Boyd Snow, Vaughn Guymon and George Tucker. This list is on-going and more names will be added. 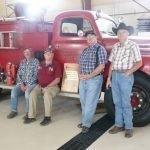 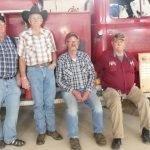 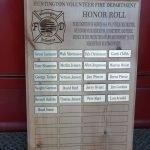