The Green River Pirates honored senior basketball players during the final home game of the season.

On the boys team, Spencer Marshall, the son of Kevin and Kitty Marshall, Colton Davis, the son of Mike and Lisa Davis and AB Mendoza, the son of Adan Mendoza and Delia Escalante played in their final home game as Pirates. 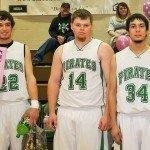 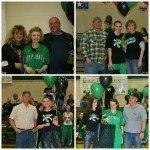