Henrie stated that shortly after she was promoted, she made the decision to do something different and begin a new committee. This committee, the Hospitality Committee, is geared toward working with local hotels, restaurants and other businesses to encourage better customer service, help front-line ambassadors learn more about the area and help provide an outstanding experience for those visiting.

While trying to work out kinks for who would be chosen for the award first, Henrie was approached by a fellow employee that wished to know what was being done with the local hotels and stated that they had their own story. This employee and their family had both a great hotel experience and a terrible one.

The great experience was at The Greenwell Inn and, more specifically, with Jenny Taylor. While Taylor was working the front desk, she was polite with the family and expressed her distress that they had a bad experience in the area. Upon the family entering their hotel room, Taylor took the time to call the family and check that they were well and had what was needed.

“I think this is a great example of what we need in our local hotels,” Henrie stated.

The commissioners also spoke on this experience and award, with Commissioner Tony Martines stating that hotels are the face of the community. He and Commission Chair Casey Hopes both thanked Taylor for her due diligence. Taylor was awarded with a certificate of appreciation as well as a $50 gift card.

Speaking on the committee, Henrie said that they wish to know that Carbon County’s visitors are leaving with a long-lasting, positive memory. Those that believe that they know someone in the hospitality industry that is deserving of recognition should contact Henrie at (435) 636-3701 or visit the Carbon County Office of Tourism’s Facebook page. 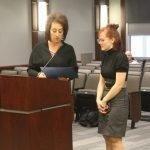 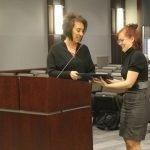 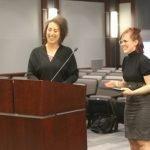