An empty field may soon be bustling with visitors as the construction of the Castle Gate RV Park and Campground gets underway in Helper. The beginning of the transformation was celebrated on Wednesday as owners Tom and Cindy Lund broke ground in South Helper.

“Six years ago, Cindy and I first came to town to attend the arts festival and see the Mining and Railroad Museum,” Tom explained. “We fell in love with the town and started coming back over and over, meeting people and just taking in what Helper has to offer.”

These trips gave birth to an idea that aimed to benefit those visiting the area as well as diversify the are’s economic base.

“At the time, many buildings were vacant and there was a certain sadness in that, but we saw so much potential,” Lund continued. “We came up with the idea that a larger scale RV park and campground just might be an economically viable enterprise that could help bring tourism dollars into the area to help diversify the economic base of the area.”

The idea came with hurdles, though. Starting from the concept being sketched on a napkin, Tom and Cindy developed the concept into a plan that would need to pass the inspection of government officials, local residents and potential lenders.

Six different banks turned them away. Six private investors did the same. Finally, an entity took on the project.

“We finally found a small community bank in Arkansas that believed in Helper, believed in us and believed in the project,” Tom said. “Together with them and the SBA (Small Business Administration), we were able to get the project financed.”

Now, six years after visiting Helper for the first time, the Lunds are taking on their second business venture in the city. The pair also own The Helper Hub on Main Street and will be able to add the upcoming RV park and campground to their resumes.

Tom and Cindy broke ground for the project on Wednesday morning. The site for their newest business venture is on Spring Glen Road, just blocks from Helper City’s Main Street, a spot Tom and Cindy hope will be a highlight for Highway 6 travelers.

“We literally count hundreds of RVs and toys that drive by us every single day on their way to Moab or other destinations. If we can convince just 10% of those to stop here instead, it will work out just fine,” said Tom.

The Lunds anticipate the project to come to fruition and be open for business in Spring of 2019. The facility will feature 106 lots, including 12 cabins, eight tent sites and 86 RV spaces. A store, meeting facilities, restrooms and pavilion will complement the site along with fun amenities such as a splash pad and river access. 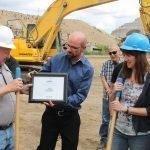 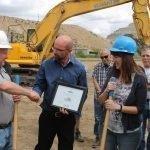 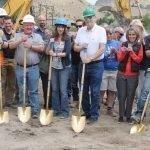 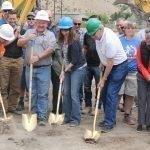 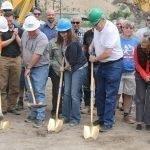 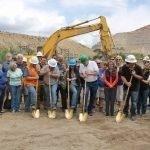