There is no shortage of unique and beneficial businesses located along Helper City’s Main Street. One such business is Handy Candy Tattoo and Piercing, owned by Keisha Way.

The shop opened its doors eight years ago. Way stated that she believes that being dispersed in an artist community is a great benefit to being located where she is. Being in such an environment means, to Way, that she is respected more as an artist and it is understood that Way and her shop are different than what is assumed of a tattoo shop or artist.

In a short period of a few months, Way projected that at least 40% of her costumers are new. However, she also stated that a great deal of the community, as well as visitors from far and wide, have been visiting her since the beginning.

A huge majority of Way’s return customers are not from the area, traveling from locations such as Salt Lake, Ireland, Scotland, Australia and Alaska, to name a few. Her Alaska clients make a point to visit every three to six months, bringing family and friends.

Way prides herself on bringing a respectable business to the community and believes that the city knows they can count on her to bring in clients that are very respectful, boosting the area’s tourism. Many of Way’s clients are doctors, lawyers and the like.

Harper, who has completed schooling for the permanent cosmetic application, will also begin apprenticing under Way for tattooing.

Handmade jewelry and artwork are also available at the shop. Nearly all of the pieces are created by Way herself, but there are pieces from clients in the shop as well.

Another component of business Way has entered into is creating jewelry in conjunction with the band Imagine Dragons. The band had been on the search for an individual that was skilled in wire jewelry and many people from far and wide suggested Way to the members.

The band sends Way their guitar strings from their tours and practices. Way then takes the strings and turns them into jewelry that Imagine Dragons sells on their website to raise money for families that have children that have cancer through the Tyler Robinson Foundation. The money raised is used to assist families with their bills, offset decreased income if one parent must quit work to care for the child and more. The band wished to pay Way for the work, which she thankfully declined.

As a thank you, the band sent Way and her husband to a gala this year where they were able to watch the band perform live and eat dinner with many celebrities. Two and a half million dollars were raised that evening for the cause.

Furthermore, in her personal life and through efforts made at Hand Candy Tattoo and Piercing, Way has made contributions to the Castle Country community. In the summer of 2018, Hand Candy teamed up with TougHer Gym in Price to provide toys for patients at Primary Children’s.

This year, Way and her family are going to purchase craft items to make gifts for residents at Pinnacle Care Center. Quite a bit is donated to the Children’s Justice Center and Habitat for Humanity as well.

Owning a business on Helper’s Main Street is also in Way’s blood. Her mother has taught power tumbling on the same street since the ‘80s and Way believes that her entrepreneurial spirit is what has pushed her to want to run her own business.

“I love that Helper has become such a women-run town,” Way concluded.

Handy Candy Tattoo and Piercing is located at 70 South Main Street in Helper and can be reached by calling (435) 650-5866 or by visiting the business’ Facebook page. 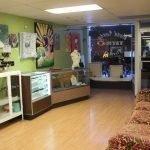 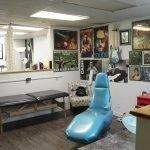 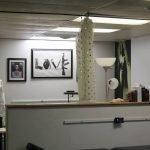 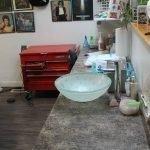