At approximately 3 p.m. Thursday afternoon, a fatal accident occurred on Highway 6 near milepost 264.

According to Utah Highway Patrol, a Toyota 4Runner was traveling east in a heavy rainstorm when the driver lost control of the vehicle, spinning into the westbound lane. The Toyota struck a Ford Escort, crashing into the car’s driver side door. Jack LeRoy Seiber, 22 of Blackfoot, Idaho was driving the passenger car and was killed in the accident.

UHP reported that the driver of the Toyota was not injured however, two occupants in the vehicle were transported to the hospital with non-life threatening injuries.

Highway 6 was shut down completely for a short period of time while Eagle Air Med landed. Traffic was delayed for about three hours while officers investigated the scene.

According to initial police reports, alcohol or drugs did not play a role in the fatal crash. 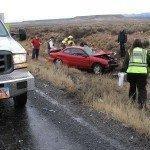 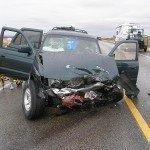