Helper American Legion released its schedule for the summer on Monday. The 19U team will host its first game this coming Wednesday, June 3 at 7:30 p.m. against Team Utah. The 17U team will have an extra week before it plays a doubleheader on June 8 against Salem Hills. Games will run through the first of July and the complete schedule can be found below. 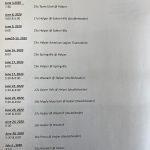