In the July Helper City Council meeting, the wayfinding project, headed by Mayor Lenise Peterman, was approved. In late 2019, the wayfinding concept was introduced by USU Logan’s Landscape Architecture students in the Master Design Plan provided to the city.

The wayfinding project is an informational system that will assist visitors in navigating the city of Helper. It was stated by Mayor Peterman that through donations from Utah Power Credit Union, Juliano Consulting and Carbon County, the system was able to be finalized and moved into production.

This system incorporates Carbon County’s branding strategy by using the same colors and font schemes as was set forth through branding guidelines, which gives Helper the opportunity to assist in creating a consistent look and feel with the county’s marketing.

On Friday afternoon, Mayor Peterman joined the CEO of Utah Power Credit Union to begin the first phase of installation. 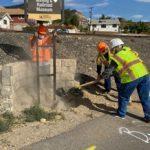 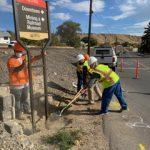 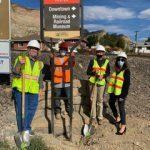 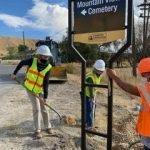