The first topic tackled during the virtual October Helper City Council meeting on Thursday evening was the proclamation against the privatization of the United States Postal Service.

Mark Montoya, who is from Carbon Branch 2171, based out of Price but delivering for Helper City, was also virtually present in the meeting for discussion. He spoke on the many positive aspects of the Postal Service, highlighting that they give veteran preference when it comes to hiring.

Montoya stated that he does not believe that people realize the global impact that privatizing the Postal Service could have. He remarked that they have good, high paying jobs and they are a focal point of the community that depends on them.

The Helper City Council then went on record as to opposing of the privatization. Montoya thanked them all for their official opposition. 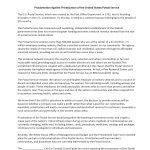