The Helper City Council received a visit from a Helper Arts, Music and Film Co-Director Kate Kilpatrick-Miller during the regularly-scheduled council meeting on Thursday to receive the final update before the highly-anticipated festival begins later this month.

Kilpatrick-Miller started by stating that by Thursday, Aug. 16, all cars will need to be off of Main Street early in the day as the road closes at 12 p.m. for setup. The stage for that evening’s Culture Connection event, in conjunction with the festival, will then be erected in the middle of the street. Route 89 is the entertainment that will be performing for the evening. A gallery stroll will also be taking place that evening as well as an event by the Carbon High School Sterling Scholars at the Rio Theater beginning promptly at 6 p.m.

Kilpatrick Miller continued the update by stating that the liquor license was approved and will be the same as the year prior. The area allowing alcohol will end at Depot Street just after the post office. A Minute to Win It event will also take place on Saturday afternoon between band performances. That afternoon, Helper Mayor Lenise Peterman will announce the city motto along with a special announcement.

Nearly 50 vendors have signed up to be a part of the festival thus far. This year’s theme is “Stop, Look and Listen.” The 2019 Helper Arts, Music and Film Festival will take place Aug. 16 through 19. See a complete schedule of events below. 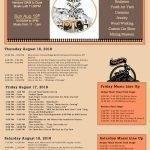