Carbon County Attorney Christian Bryner spoke on a number of subjects with the commissioners before 2018 comes to a close during their meeting on Wednesday. First, Bryner discussed the possible approval of a memorandum of understanding (MOU) with Helper City for use and training of a polygraph examiner.

Helper City Police Chief Trent Anderson was recently sent to polygraph examiner training by the city. Bryner stated that the current county examiner, Will Draughon, is winding down in his career and if he were to retire in the next several years, the county would be without. The county has relied on Detective Draughon for many years on cases.

Chief Anderson wishes to continue his role as chief and also take on the examiner role. Bryner informed the commissioners that the county has funds that would assist in paying for the tuition of the schooling Chief Anderson has completed and that Det. Draughon is willing to train Chief Anderson under him.

“We feel like this would be a great benefit for our county attorney’s office,” Bryner stated.

Helper City Mayor Lenise Peterman later briefly touched on this, stating that Helper City is proud to support Chief Anderson’s desire to learn and grow his skill set in keeping the community safe. She continued by stating that he tackled his polygraph training away from home for an extended period of time while maintaining a pulse on what was going on in Helper.

“This skill set will not only benefit Helper, but Carbon County as well,” Mayor Peterman said. “We appreciate the support of the county attorney’s office, who contributed financially to this effort.”

Mayor Peterman also expressed her appreciation for the grant funding secured by the chief and city in covering the remaining costs. Concluding her statement, Mayor Peterman stated that Chief Anderson is to be commended for his efforts in expanding his skill as well as ensuring that there is access to the tools required to keep the community and local children safe.

In the end, this was approved by the commissioners.

Also discussed between the commissioners and Bryner was the appointment of David Handy as a part-time prosecutor. Bryner stated that the proposed contract would allow the local attorney to work 20 hours per week at $30 an hour for the county. Initially, Handy will assist with misdemeanor-type matters.

Grant funding is available to assist with the cost. Bryner stated that the county may also move grant funding to allow the use of money that is already budgeted and that the money needed is already within the budget for 2019. Bryner informed the commissioners that this would simply allow the attorney’s office to complete additional work in a more efficient and timely manner. This was also approved by the commissioners. 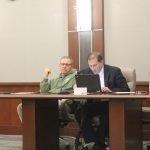