The Helper City Council hosted a regularly scheduled meeting on Thursday evening. One of the main acts of this meeting was the discussion and approval of hiring a city attorney. Mayor Ed Chavez met with the attorney beforehand as well as John Schindler.

A proposal was made to hire Jeremy Humes as the city attorney. Humes would then in turn hire Schindler to handle the court cases while Humes covers all matters civil. Humes has acted as the East Carbon city attorney for eleven years and has also worked closely with Carbon County for nearly the same amount of time.

Humes lives in Price and was raised in Spring Glen.

Also brought to the attention of the council members is the fact that the wages for the attorney would need to be increased from $1,300 a month to $2,500. The funds would go to Humes office and he would in turn pay Schindler when work from him is needed. Humes was made the Helper City attorney at the meeting.

Dyer also wanted to remind all that there is still a branch open in Price that is happy to serve the community. The paperwork for the building being donated has already been completed and recorded for the city.

“We are proud to be able to present this to you guys,” Dyer stated. 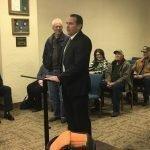