Roger Metzger spoke to the Helper City Council on a several separate items on Thursday. The first item Metzger discussed was that he, along with assistance, planned to once more cook breakfast for the Helper Arts Festival and needed to request permission for the use of the pavilion. This breakfast has occurred at the festival for many years and was easily allowed by the council members.

Metzger also spoke to the commissioners about the plaques that will be placed honoring several individuals. There will be three panels on one stand and are planned to be placed on the parkway on July 23. The decision was made by the council members to have a member assist in finding a spot for the plaques.

Kate Kilpatrick-Miller presented the council members with another update on the upcoming Helper Arts Festival. The planning for the festival is in the final stages. Kilpatrick-Miller was fortunate enough to travel to other arts festivals in Utah and stated that she has gained great knowledge and ideas, ones that will be utilized in upcoming festivals. She informed the council members that insurance was secure and records have been provided to Helper City. A liquor license was also secured for the festival.

A brief discussion on a project that business owners on Main Street have brought together was presented. The hope is to erect a sitting area complete with bench, trees and more for community members and tourists to enjoy. The project was ultimately tabled for a later date so that the current focus could be on finishing the road projects and the Arts Festival.

Citizens of Helper City and the rest of Carbon County will be happy to see that Main Street is nearly finished. After nearly half a year of not being able to use most of Main Street, Knife River has almost completed the project. There isn’t an actual end date for the road yet, but Helper Mayor Ed Chavez happily informed all that attended the council meeting that by the next meeting attendees will be able to park in front of the auditorium. 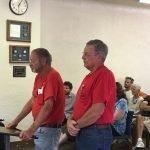 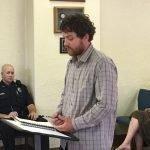