Helper Junior High School’s football team capped off a championship season with a 50-14 win over Mont Harmon at Carbon High School on Thursday afternoon. Playing at Carbon High was not too unfamiliar for this heavily road-tested team. Due to the water and sewer projects that were ongoing throughout the season in Helper, the Rams were forced to play all of their football games at opponents’ venues.

This is the second CVAA championship in three years for the team who has amassed a record of 15 wins and three loses during those campaigns. This includes the perfect 6 – 0 record that led to the Rams most recent championship this season.

Head coach Phil Howa is very proud of his team and their accomplishments. “Our ninth and eighth grade players consistently challenged each other all season”, said Howa. “This season has been something special and I am very happy for our kids.” Assisting Phil Howa on the field this year was Leroy Nielson and Jeremy Atwood. 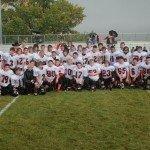