After approval from the school board, the Carbon School District has been working for over six months to implement a 1:1 computer initiative in secondary schools in the district. The initiative will ensure that each student at Helper Junior High, Carbon High and Mont Harmon Junior High will receive a take-home Chromebook laptop to use for academic purposes. After research from other schools in the state that have donned the 1:1 computer initiative, the district decided to buy a laptop for every student at a single school to test the program’s effectiveness.

Helper Junior High is the test school in the district to receive a laptop for each student. Helper was chosen to test the initiative for several reasons. Initially, principal Mika Salas has a good understanding of technology and has been very supportive and excited about the project. In addition, teachers Rob Bradley and Chris Sweeney have been incorporating technology into their current classroom settings and understand the needs of the students in light of the 1:1 initiative. Finally, the small student body at Helper Junior High was a key factor in the decision.

“We feel like we can test this situation with 200 students much easier than 600 at either Mont Harmon or Carbon High,” stated Carbon School District Superintendent Steve Carlsen.

Students at Helper received their new Chromebooks on Tuesday during class. The Chromebook was chosen as the laptop for the students by the district technology department. According to Carlsen, the computer uses Google Chrome as its operating system and passes all of the requirements the technology department claimed would work with their network and monitoring system.

Access on the computers are filtered and whatever students can access at school, they can access at home. An agreement was signed by each person assigned a laptop stating they would follow certain guidelines for the computers. Parents were also informed on the in and outs of the agreement. A $15 insurance fee was also required in order to receive a laptop.

The students will use the laptops for the remainder of the school year. Students and teachers will test the computer’s effectiveness in the classroom environment and report to the school district. From there, the district will decide if the program will go further next year by giving laptops to each person at Carbon and Mont Harmon.

Bradley, who teaches science at Helper, assisted students in setting up their computers during class on Tuesday and is excited for the possibilities the computers bring to academic advances in his class.

“We have been using Chrome for a couple weeks in my class,” Bradley explained. “It is great for collaboration between the students. They can all work on a single document and I can see who contributes what to the assignment.”

In addition to working on in-class assignments, students will take home their computers to complete homework assignments and study. They will also be able to work on group assignments outside of class by working together through Chrome.

School board members, Carbon County School District workers and Helper teachers and students are excited about the possibilities that the Chromebooks will bring to academic progress in the near future. It is the hope of many that the test at Helper Junior High will prove to be a success so that every secondary student in the district can receive this technology as well. 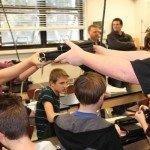 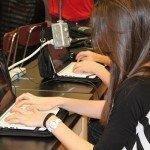 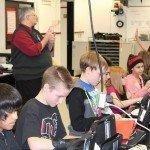 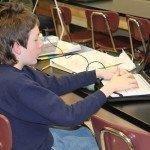 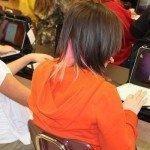 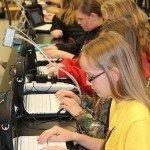