Helper business owner Ann Jespersen gave the first design presentation. Jespersen represented a group of business and property owners who front the wedge proper. Around eight months ago, the group came together and came up with a design as to how they wanted the space to look and provided a 3D rendering for the crowd.

The group focused on the want for the space to be safe, beautiful and functional while also providing the economic liability of business owners. Jespersen stated that the group’s main concern now is to get proper feedback and input from the community. She also stated that she has worked closely with all of the property owners.

The design concept of Jespersen’s group included many benches, tables and even a fire-pit. The group went to the American Institute of Architects to bring their attention to Helper City. One of their first comments was that there was nowhere to sit as well as no shading, which prompted the group to be sure and include trees in the concept.

The Revitalization Committee then presented its own design concept to those in attendance. Malarie Matsuda spoke for this group, stating that the whole point of the meeting was to learn what the community thinks. She stated that the committee wanted to maintain and highlight Helper’s historic authenticity. A number of professionals have been consulted by the committee and, with community feedback, they came up with three separate designs.

These designs were then studied until a final design, a combination of the three, was made that met the needed criteria. This design included many trees, benches, a possible stage, a pergola and more.

A final decision was not made during this meeting as the sole purpose was to obtain final feedback from the community. The voting will take place on March 27 at the Helper auditorium.

To look at the design concepts and find out more, please visit helperrevitalization.org. The committee also has a Facebook page that can be found under the name “Helper Revitalization Steering Committee.” 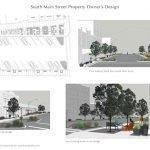 concept by Ann Jespersen and other Helper business owners 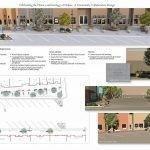