The students of Helper Middle School’s FCCLA are rightly pleased to announce the success of their Cans for Cocoa and a Cookie food drive.

The student’s goal was to collect 200 cans in only three weeks. FCCLA got all of the students excited by offering them a cup of cocoa and a cookie just for donating non-perishable food items. The idea turned out to be so successful that the school received just under 300 food items in less than two weeks.

The students were thrilled to be a part of such a worthy cause. FCCLA is proud of the impact that it has on the community.

All donations received will go to the Carbon County Food Bank. 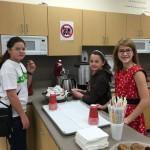